Take this product. It is good for you. Though, I have suffered from its side effects!

Written by: Iranian Aid to Rescue the West (IARW).
November 11, 2017. All rights reserved. 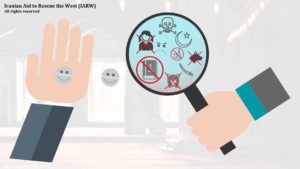 Please consider the implications of the following conversation between two persons. One of them is using a particular vitamin and strictly believes in it. He feels a responsibility to persuade other people to use that product.
The second person does not know about that vitamin, but he is a target customer for the salesman. He may become a future consumer persuaded by the first person. In short, the conversation is between a salesman hereafter called “M” and his target customer “C”.

This was a conversation between a salesman and a target consumer of a product. Now we are going to substitute the product with Islam. This religion is widely promoted through mosques in Western countries. Westerners are considered the target customers in this marketing campaign. Westerners have been hearing many good things about Islam including, “Islam is a religion of peace,” nevertheless, a majority of them never read the Quran which is the main guideline for the Islamic religion.
Therefore, we will now review a few verses of this book that sound unhealthy for Western countries. The aim is to show you some potential side effects and dangers of this religious manual. It is up to the readers to judge for themselves.

Therefore, we will now review a few verses of this book that sound unhealthy for Western countries. The aim is to show you some potential side effects and dangers of this religious manual. It is up to the readers to judge for themselves.

“Some dispute about Allah, though they have neither knowledge nor guidance, nor an illuminating Book.  There is for him who turns his side to lead (others) astray from the Path of Allah, degradation in this life and We shall let him taste the punishment of the burning on the Day of Resurrection.” (Quran Sura 22: AL-HAJJ (THE PILGRIMAGE), Verses 8, 9. Translation of Qarib)
“The pagans do not have any right to establish (and patronize) the mosque of God while they testify against their souls to its disbelief. Their deeds are devoid of all virtue and they will live forever in hell fire. Only those who believe in God, the Day of Judgment, perform their prayers, pay the religious tax, and have fear of God have the right to establish and patronize the mosque of God so that perhaps they will have the right guidance. Do you (pagans), because you served water to the pilgrims and constructed the Sacred Mosque, consider yourselves equal to those who have believed in God, the Day of Judgment, and have fought for the cause of God? In the sight of God you (pagans) are not equal to the believers. God does not guide the unjust.” (Quran Sura 9: AL-TAWBA, BARA’AH (REPENTANCE), Verses 17 – 19. Translation of Sarwar)

“Believers, do not consider the Jews and Christians as your intimate friends for they are only friends with each other. Whoever does so will be considered as one of them. God does not guide the unjust people.” (Quran Sura 5: AL-MAEDA (THE TABLE), Verse 51. Translation of Sarwar)
“Let not the believers take the unbelievers for friends rather than believers; and whoever does this, he shall have nothing of (the guardianship of) Allah, but you should guard yourselves against them, guarding carefully; and Allah makes you cautious of (retribution from) Himself; and to Allah is the eventual coming.” (Quran Sura 3: AL-E-IMRAN (THE FAMILY OF ‘IMRAN), Verse 28. Translation of Shakir)

“O Prophet, urge the believers to fight. If there are twenty patient men among you, you shall overcome two hundred, and if there are a hundred, they shall overcome a thousand unbelievers, for they are a nation who do not understand.” (Quran Sura 8: AL-ANFAL (SPOILS OF WAR), Verse 65. Translation of Qarib)
“Believers, why is it that when it is said to you: ‘March in the Way of Allah, ‘ you linger with heaviness in the land? Are you content with this life rather than the Everlasting Life? Yet the enjoyment of this life in (comparison to) the Everlasting Life is little. If you do not go forth, He will punish you with a painful punishment and replace you by another nation. You will in no way harm Him; for Allah has power over all things.” (Quran Sura 9: AL-TAWBA, BARA’AH (REPENTANCE), Verse 38, 39. Translation of Qarib)

In the verse below, the word “he” refers to Allah himself:
“He brought down from their fortresses those who had supported them from among the People of the (Jewish) Book and cast terror into their hearts, so that some you killed and others you took captive. He made you inheritors of their land, their houses, and their possessions, and another land on which you had never set foot before. Truly, Allah is Powerful over everything.” (Quran Sura 33: AL-AHZAB (THE CLANS), Verses 26, 27. Translation of Qarib)
“The believers are only those who believe in Allah and His Messenger then they doubt not and struggle hard with their wealth and their lives in the way of Allah; they are the truthful ones.” (Quran Sura 49: AL-HUJRAAT (THE PRIVATE APARTMENTS), Verse 15. Translation of Shakir)

“The believers are only those who believe in Allah and His Messenger, and who, when gathered with him upon a common matter do not depart till they have asked his permission. Surely, those who ask your permission are those who believe in Allah and His Messenger. When they ask your permission for some of their affairs, grant it to whomever you please and ask Allah for forgiveness for them; Allah is the Forgiver, the Merciful.” (Quran Sura 24: AL-NOOR (THE LIGHT), Verse 62. Translation of Qarib)

“It is not for any believer man or woman to have the choice in the affair when a matter is decreed by Allah and His Prophet. Whosoever disobeys Allah and His Messenger strays into clear error.” (Quran Sura 33: AL-AHZAB (THE CLANS), Verse 36. Translation of Qarib)

“Do not say of anything: ‘I will do it tomorrow,’ unless (you add) ‘if Allah wills. ‘ And remember your Lord when you forget and say: ‘It may be that my Lord will guide me to something nearer to rectitude than this. ‘” (Quran Sura 18: AL-KAHF (THE CAVE), Verses 23 – 24. Translation of Qarib)

“You are forbidden (to consume) the dead, blood and the flesh of swine; also flesh dedicated to any other than Allah, the flesh of strangled (animals) and of those beaten, that which is killed by falling, gored to death, mangled by beasts of prey, unless you find it (still alive) and slaughter it; also of animals sacrificed on stones (to idols). … .” (Quran Sura 5: AL-MAEDA (THE TABLE), Verse 3. Translation of Qarib)
“Believers, wine and gambling, idols and divining arrows are abominations from the work of Satan. Avoid them, in order that you prosper.” (Quran Sura 5: AL-MAEDA (THE TABLE), verse 90. Translation of Qarib)
“As for the man or woman who is guilty of theft, recompense them by cutting off their hands for their crimes. That is the punishment from Allah. Allah is Mighty, Wise.” (Quran Sura 5: AL-MAEDA (THE TABLE), Verse 38. Translation of Qarib)
“If any two people commit fornication, punish them. If they repent and reform, let them go. God is All-forgiving and All-merciful.” (Quran Sura 4: AN-NISA (WOMEN), Verse 16. Translation of Sarwar)

“Worship none except Allah. I am for you, a warner sent from Him and a bearer of glad tidings.” (Quran Sura 11: HUD (HUD), Verse 2. Translation of Qarib)
“You shall lash the fornicatress and the fornicator each with a hundred lashes. In the religion of Allah, let no tenderness for them seize you if you believe in Allah and the Last Day; and let their punishment be witnessed by a party of believers. The fornicator shall marry none but a fornicatress or an idolatress; and the fornicatress none shall marry her but a fornicator or an idolater; that is forbidden to the believers. Those who accuse chaste women, and cannot produce four witnesses, you shall lash them with eighty lashes. And never accept their testimony, for they are evildoers, except those among them that afterwards repent and mend their ways. Allah is Forgiving, Merciful.” (Quran Sura 24: AL-NOOR (THE LIGHT), Verses 2 – 5. Translation of Qarib)
“People of the Book, do not exaggerate your religion. Do not say about Allah except the truth. Indeed, the Messiah, Jesus son of Mary, is only a Messenger (and Prophet) of Allah, and His Word (Be) which He gave to Mary, and a (created) spirit by Him. So believe in Allah and His Messengers and do not say: ‘Trinity. ‘ Refrain, it is better for you. Allah is only One God. Exaltations to Him that He should have a son! To Him belongs all that is in the heavens and in the earth, it is sufficient that Allah is the Guardian.” (Quran Sura 4: AN-NISA (WOMEN), Verse 171. Translation of Qarib)
“And they say: The Beneficent Allah has taken (to Himself) a son. Certainly you have made an abominable assertion. The heavens may almost be rent thereat, and the earth cleave asunder, and the mountains fall down in pieces, that they ascribe a son to the Beneficent Allah.” (Quran Sura 19: MARYAM (MARY), Verses 88 – 91. Translation of Shakir)

“And say to the believing women, that they lower their gaze cast down their eyes and guard their chastity, and do not reveal their adornment except that which is outward (face and hands); and let them draw their veils over their neck, and not reveal their adornment except to their husbands, or their fathers, or their husbands’ fathers, or their sons, or their husbands’ sons, or their brothers, or their brothers’ sons, or their sisters’ sons, or their women, or what their right hands own, or such male attendants having no sexual desire, or children who have not yet attained knowledge of women’s private parts; nor let them stamp their feet, so that their hidden ornament is known. And, O believers turn to Allah all together, in order that you prosper.” (Quran Sura 24: AL-NOOR (THE LIGHT), Verse 31. Translation of Qarib)
“O Prophet! say to your wives and your daughters and the women of the believers that they let down upon them their over-garments; this will be more proper, that they may be known, and thus they will not be given trouble; and Allah is Forgiving, Merciful.” (Quran Sura 33: AL-AHZAB (THE CLANS), Verse 59. Translation of Shakir)

“Believers, your slaves and the immature people must ask your permission three times a day before entering your house: before the morning prayer, at noon time and after the late evening prayer; these are most private times. After your permission has been granted, there is no harm if they come into your presence from time to time. This is how God explains His revelations to you. God is All-knowing and All-wise.” (Quran Sura 24: AL-NOOR (THE LIGHT), Verse 58. Translation of Sarwar)
“If any of you do not have the means to marry a chaste believing woman, marry your believing slave-girls. God knows best about your faith. You have the same faith. Marry them with the permission of their masters and if they are chaste and have avoided fornication and amorous activities, give them their just dowries. If after marriage they commit adultery, they should receive half of the punishment of a free woman who has committed the same crime. This is for those who fear falling into evil. It is better for you to have self-control. God is All-forgiving and All-merciful.” (Quran Sura 4: AN-NISA (WOMEN), Verse 25. Translation of Sarwar)

In conclusion, hopefully by thinking deeper about some words of the Quran readers will have a better understanding of Islam. This would help them deal with an advertising campaign that tries to promote such a product in their society.
Reference for the Quranic Verses that have been used in this article:
http://www.parsquran.com/eng/